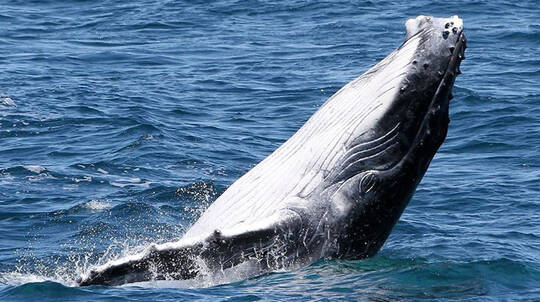 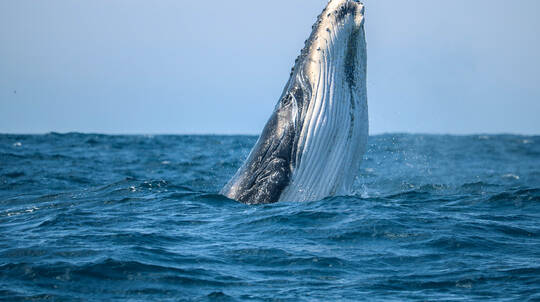 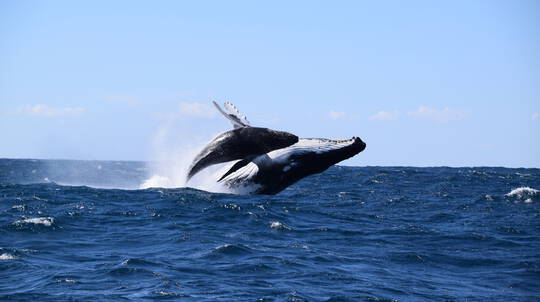 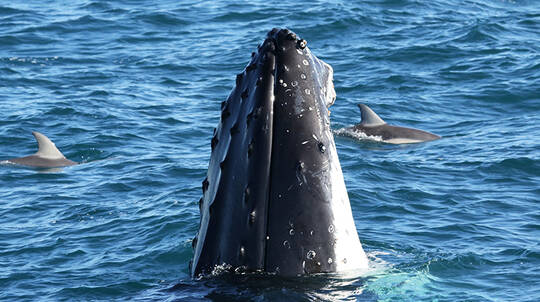 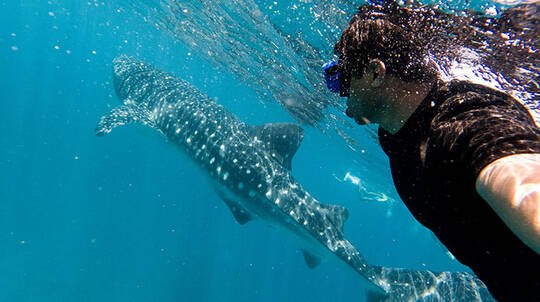 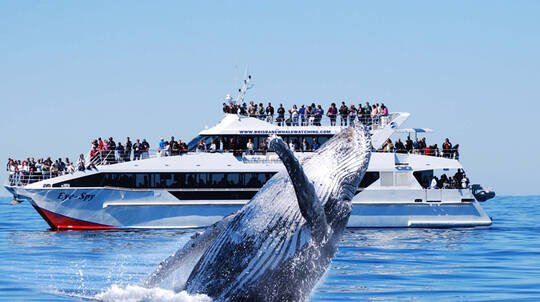 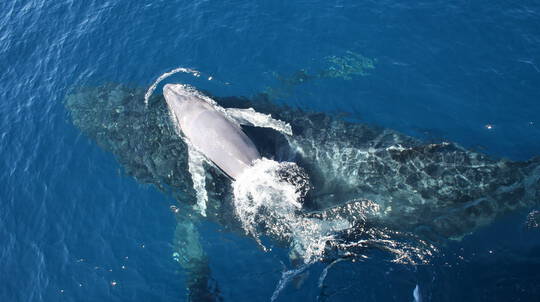 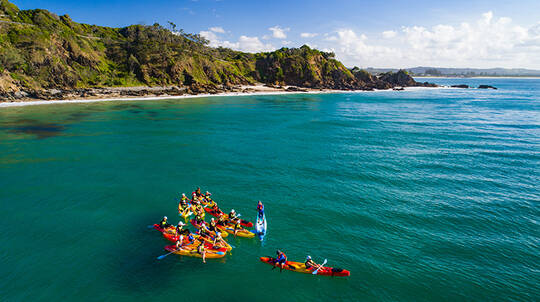 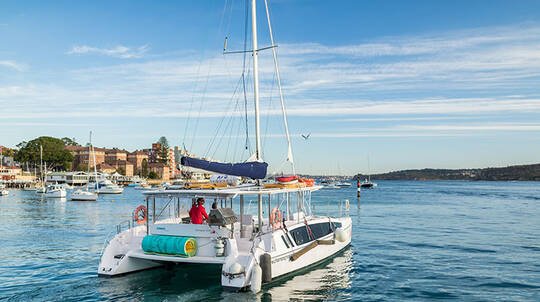 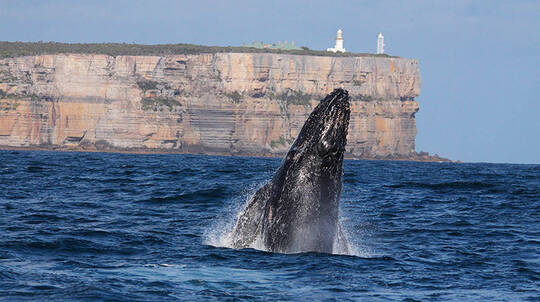 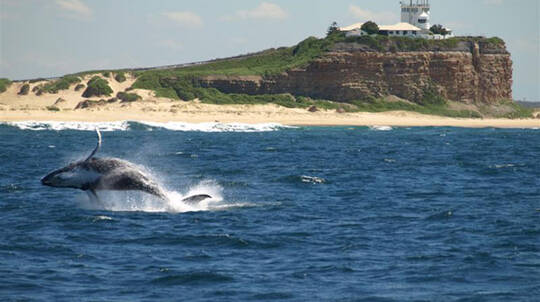 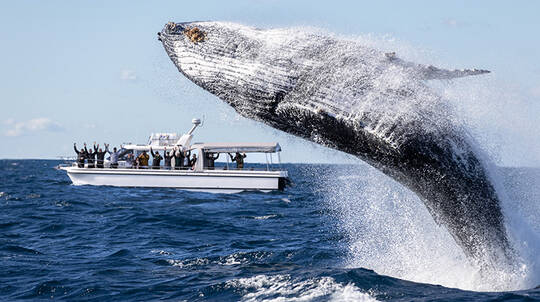 Discover the magical spectacle of a whale watching adventure from RedBalloon. Viewing these majestic kings and queens of the sea in their natural habitat during whale season is unlike any marine-based experience you will embark upon. RedBalloon puts you in the picture as you feast your eyes and feed the senses on the unmatched displays of migrating humpback, southern right, dwarf Minke and even the rare sighting of blue whales along the Australian coastline. There are group, private and VIP sightseeing experiences for whale watching. You can also take part in snorkelling and swimming adventures, both half and full-day tours, at every prime destination including Jervis Bay, Nelson Bay, Byron Bay, Hervey Bay, Gold Coast and plenty more locations.

If you’re looking to book a whale watching cruise, it is important to do so during the whale season in Australia. This can vary for different states so be sure to look at each individual experience which includes details of when whale watching season is and the best time of year to go.

When is whale watching season?

Whale watching season traditionally takes place between May and November in the Southern Hemisphere. During this period, thousands of southern right and humpback whales, among others, migrate north to warmer waters from the Southern Ocean to mate and calve. Different whale species make their appearance at distinct waterways with almost clockwork regularity. Southern rights are typically spotted in Victoria and South Australia during the whale season between June and October, when they swim close to the shorelines. From May to July and September to November, humpback whales can be seen swimming close to Sydney shores en route to Queensland.

Whale watching season on the Gold Coast typically peaks in August. Humpback whales frolic and breach in Hervey Bay and off neighbouring Fraser Island between July and October. Minke whales can be spotted in the Ribbon Reefs of the Great Barrier Reef between May and September, peaking in July. You can get up close and personal at the heritage-listed Ningaloo Coast, WA, and swim at the reef with these gentle giants between March and September. There is no better time of year than during whale season to tick seeing these mammals up close off your bucket list!

What time of the day is best for whale watching?

During whale watching season, any time is the right time of day to view migrating whales in their element. However, the best time for capturing their majesty is between 11am and 3pm, when the overhead light works its magic, photographically, for this breathtaking experience.

Whale watching near me

If you constantly find yourself asking ‘where is whale watching near me’, browse through the RedBalloon experiences for a variety of cruises and tours close to your city. You’ll discover plenty of whale watching experiences around the country so you’ll definitely be able to find one near you.

Where to go whale watching?

Whale watching takes place from Bondi Beach to Bremer Bay, WA, and all Australian coastal destinations in between. Multiple whale sightings generally exceed expectations on board a wide range of whale watching tours offered at RedBalloon. You’ll never find yourself asking ‘where is whale watching near me’ again after browsing through our range of experiences.

How much does it cost to go whale watching?

The natural marvel of whale watching costs from as little as $49 on board the Mandurah Island Dolphin Cruise, WA, to the exclusive offer of Whale Watching and Speed Boat Thrill (for up to 21 people) from Circular Quay or Manly Wharf, Sydney NSW, for $1333.

What to take whale watching?

You should definitely take your camera for capturing these magnificent mammals in their natural habitat; who are always putting on a once-in-a-lifetime display for the benefit of their awe-inspired spectators.

How to dress for whale watching?

Dress warmly and weather appropriately. Enclosed, comfortable footwear, a parka or weatherproof jacket, beanie, cap or hat and sunglasses are advisable for averting water-reflected glare. Your experience provider can recommend appropriate clothing suggestions, depending on the weather and your whale-watching location. You should also apply plenty of broad-spectrum sunscreen to avoid sunburn during your unforgettable day out on the water.

Whale watching is a completely safe exercise that takes place aboard modern vessels with spacious viewing decks. Experienced crews who are marine-life specialists operate these tours. Safety, education and exhilaration are the end result of these memory-making expeditions offered in an extensive range of whale-watching deals online at RedBalloon.