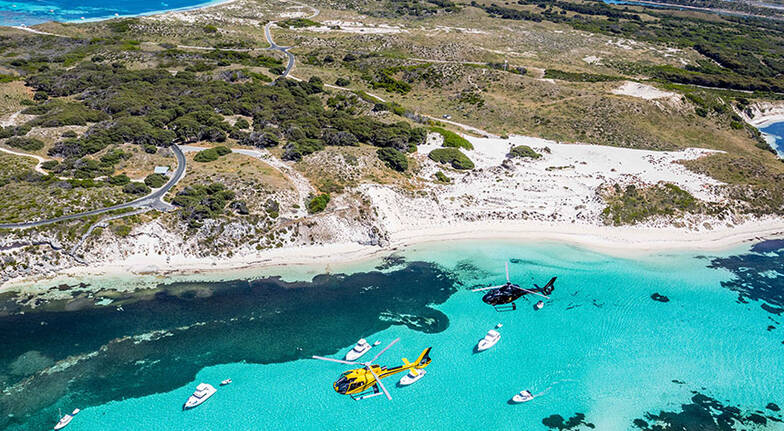 Own it now, pay later. From $82.22 per week.
Learn more
3 years to use the value of your voucher.
Free exchanges.
Our price guarantee.
Handpicked suppliers.

There's nothing like flying to Rottnest by helicopter; with stunning views over Perth City, historic Fremantle and the picturesque coastline. Enjoy crystal clear visibility as you soar over the majestic Indian Ocean. Take in the views of Rottnests' turquoise bays and white sandy beaches.

Enjoy Perth's very own island paradise from the air! Fly from Jandakot airport taking in the sweeping views of historic Fremantle, the southern beaches and the sparkling swan river, Perth City, Elizabeth Quay, King's Park, Optus Stadium and more before heading across the turquoise waters of the Indian Ocean and arriving over Rottnest for a full orbit of the island with views of its lighthouse, gun turrets, spectacular coastline and pristine beaches. its not uncommon to sight Whales or dolphins so keep your camera handy!

The flight duration is approximately 45-50 minutes.

Once this experience has been confirmed changes are at the discretion of the experience provider and arranged directly with them according to this policy:

This is a private flight for 2 passengers.

Spectators are always welcome if they wish to watch the helicopter take off from the viewing area.

In the event of rain or inclement weather your experience will still go ahead unless contacted by the experience provider.

Passengers must wear dry clothes to travel in the helicopter.