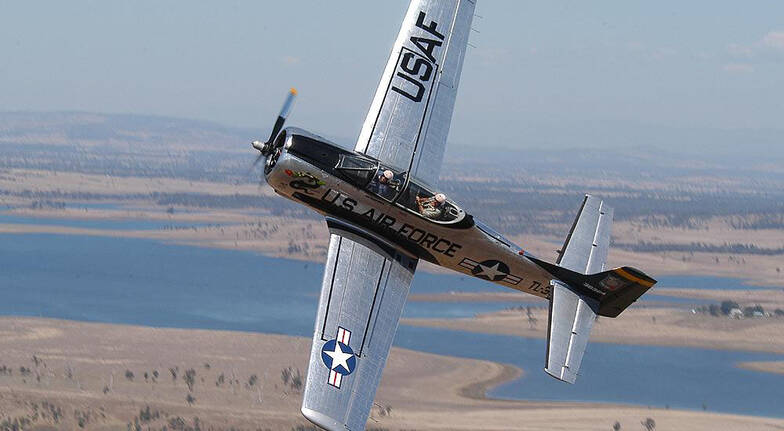 Own it, interest free, From $10 per week. More
3 years to use the value of your voucher.
Free exchanges.
Our price guarantee.
Handpicked suppliers.

Experience true fighter flight action in a genuine 1951 combat aircraft - the T28 Trojan warbird! Feel the g-force of thrilling air combat manoeuvres or just sit back as the world flies past at over 500km per hour. The fighter bomber T28 Trojan adventure flight is perfect for those in need of speed!

When you arrive at the hangar you will be introduced to the incredible T28 Trojan. As you get accustomed with the aircraft you will be amazed at its size and at the obvious power that lies in its engine bay. You will also get the chance to take lots of pre-flight photos.

Built in 1951, this veteran of the skies has seen action in the CIA-funded Air America. Our pilot, recognised as one of the most experienced T28 operators in Australia, will then debrief you on todays mission. Then its time to climb on board and get strapped in.

For the duration of the flight you will be sitting in the back seat of the aircraft, behind your pilot. All aspects of the cockpit operations will be explained. Then its on with your fighter pilot helmet. Feel the unstoppable grin spreading across your face as the engine roars into life! Hold on tight as you experience a high-speed take-off, reaching speeds of over 200km/h. Its a fast and breathtaking climb into the air! Youll get a few minutes to get used to the world rushing past as you are taken to the combat area.

Once you arrive at the combat area, youll experience the action youve been waiting for! The power and speed of the T28 Trojan is revealed as our pilot puts the warbird through a series of air-combat exercises. If a more refined and gentle experience is what you want, sit back, relax and enjoy the beautiful scenery as you are gently (but speedily) flown through the Queensland skies. On return to base, you'll have a chance for post-flight photos. Now is also the time to contemplate the fact that you have just flown in a genuine fighter aircraft. What a truly unique experience! As an exclusive for RedBalloon customers, we will also give you a souvenir cap, limited addition posters to keep and a flight certificate.

This experience is available for bookings seven days a week, weather permitting. Bookings are essential and are subject to availability. Please allow one hour for your experience. This includes briefing and 20 minutes flight time.

You must be 12 years of age or over and weigh no more than 150kg to be eligible for this experience.

The price quoted is for one person. You will be one-on-one with your pilot.

This experience may be affected by the weather. In the case of poor weather conditions, we may reschedule your experience for a later date.

Casual and comfortable clothing is recommended. Please wear enclosed shoes and bring a pair of sunglasses. Dresses, skirts and singlets are not suitable.

Customers are required to sign an indemnity form and waiver on day. All flights are fully insured. An extra waiver section for passengers under 18 years of age is to be signed by a parent or guardian.