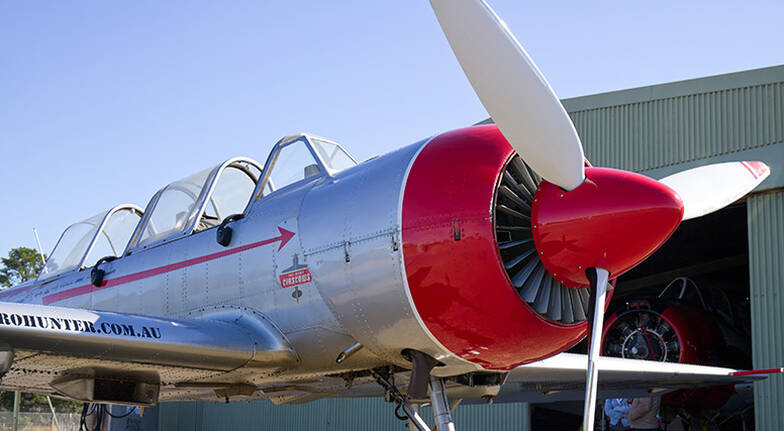 All of your senses will be stimulated the second the radial engine roars to life. This flight will be flown in the Hunter Valley and includes an introduction to G-Force, weightlessness and military manoeuvres including aerobatics such as loops, rolls, immelmans, cuban eights and stall turns.

Experience the thrill of a lifetime in an ex-military warbird fighter trainer. Departing from your choice of Cessnock or Maitland Airport, enjoy a military-style flight briefing before launching off for an exhilarating ride over the Hunter Valley. Your experienced pilot will introduce you to G-Force, weightlessness, and military manoeuvres including aerobatics such as loops, rolls, immelmans, cuban eights, and the stall turn. Whilst this adventure is not for the faint-hearted, it can be personalised to do as many moves or as little as you wish. The choice is yours!

Allow one hour for the entire experience, this includes 15-20 minutes in the air.

You will be one on one with your instructor.

In the event of poor weather your experience will be rescheduled for another day.

This experience departs from Cessnock Airport or Maitland Airport, NSW.

4 fortnightly payments of $99.75
Own it, interest free, From $10 per week. More
5 years to use the value of your voucher.
Free exchanges.
Our price guarantee.
Handpicked suppliers.