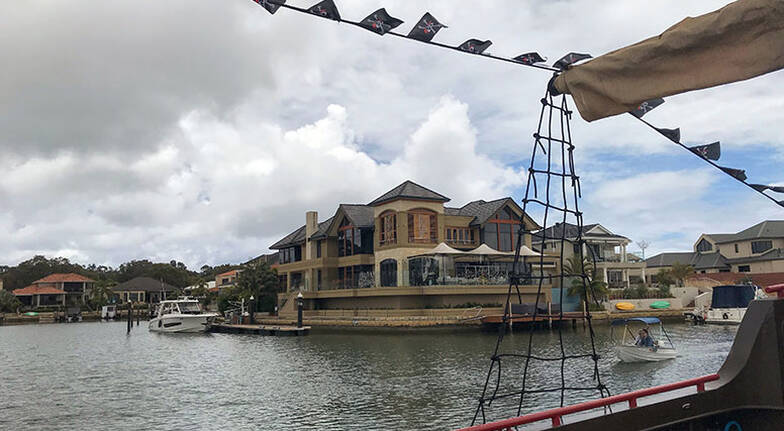 Sail down Mandurah's beautiful inland waterways and canals aboard a custom built pirate ship. Grab some lunch and marvel at the 360 views of the luxurious canal homes and spectacular wildlife including the famous bottlenose dolphin, listening to hilarious pirate comedy along the way.

Ahoy there matey! Jump aboard a custom built pirate ship and embark on a 90 minute journey around Mandurah's beautiful waterways and canals. Upon departure, grab some lunch and take a seat for the fun-filled pirate adventure ahead. On the menu is fish and chips for the adults and nuggets and chips for the kids. As you cruise along, get into the spirit and don your pirate hat and enjoy some pirate humour from the crew along the way. Marvel at the stunning luxury homes dotted along the canals as you do a full loop before coming back into the estuary and under the new traffic bridge. Don't forget to bring your camera as Western Australia's largest residential population of bottlenose dolphins can be found in the waterways all year round! Offered outside of School holidays on a Thursday & Friday during the warmer months.

This experience runs with a maximum of 50 participants.

Spectators are welcome to wait ashore, there are cafes and restaurants surrounding the jetty to sit down and grab a coffee.

The provider will endeavour to operate where possible but being an open air vessel sometimes they cannot avoid cancellations due to the weather.

Please wear suitable clothing including hats, sunscreen and sunglasses. No high heels are allowed on the vessel.