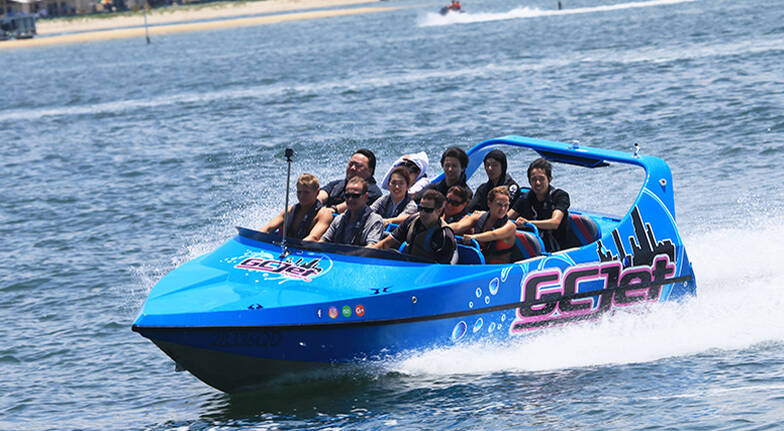 This triple combo for two is a thrill-a-minute ride in air and on water. Float high up in the sky on a tandem parasail, before taking to the water on a high-paced V8 jet boat ride. Round out the day with a guided jet ski safari, with the chance to meet dolphins, turtles and wallabies.

Experience all the thrills of sea and sky on this adventure-charged triple combo for two on the Gold Coast.Â Â Kick off the day with a gentle float over Broadbeach on the Gold Coast's highest parasail, a tandem ride 400 feet above the city with breathtaking views of the coastline and lush green hinterland.Â Next, swap the skies for the sea on a high-speed V8 jet boat ride. With speeds of up to 75km per hour, expect to get the blood pumping with lots of death-defying spins, turns, beach buzzing, slides and fishtails. Check out Wave Break Island and the mansions of the affluent gated community, Sovereign Islands, before zipping along to Moreton Bay Marine Park and Stradbroke Island.Â Â Round out the experience on a 30-minute guided jet ski safari, exploring the estuary waters of Broadwater. Along the way you'll get up close to dolphins, turtles and fish, with the chance to meet the local golden wallaby on a stop at South Stradbroke Island.

Jetski drivers must read, write and speak English for the safety induction to be completed.

This experience requires a minimum of four participants.

This experience is weather dependant. Wind and weather restrictions may apply which could result in rescheduling or cancellation due to safety precautions.

This experience is located at Marina Mirage, Gold Coast.